Over 60 parishioners of all ages attended the event which was a joint effort between the school and the St Joseph’s Ceili  Club.  Maire Darragh, head teacher at the school said, “It’s the third event of its kind. It’s just something to help celebrate St Patrick’s Day and to raise vital funds for the school. I think people are crying out for this sort of thing around this time of year”.

Music was provided courtesy of the Raymond Loney Ceili Band and there were raffle prizes on offer in the shape of an Antrim County Shirt, a Meal for Two at the Dunsilly Hotel as well as a Meal for Two at Heffron’s Bar.

“You don’t have to be the dancing sort,” said Colette Devlin, one of primary school’s teachers. “It’s great just to get everyone together. The place is full and everybody’s smiling.”

For anyone interested in finding out more, the Ceili Club hold their workshops every Monday in St Joseph’s Parish Centre at 8pm. New members are encouraged to come along.

It’s a bright early afternoon and Maureen Shannon is talking about her life. Quickly proving that she’s still as sharp as a tack, she makes it crystal clear that she would be no passive participant. Wasting no time, Mrs Shannon asks a variety of questions to do with the wellbeing of a local family, displaying the genial inquisitiveness that bonds Antrim’s community, and many others like it, together so closely.

Her living room and mantelpiece are decorated with a number of ornaments, religious trinkets and photos, all displaying the life of a woman whose world revolves around her friends, her family and her God.

Born on the 26th November 1922, Mrs Shannon is the product of a different era and is no stranger to tough times. Despite this, she remains adamant that tougher times were happier times. She says, “Oh aye, people were definitely much happier in those days. We didn’t have much, but we appreciated what we got. Young folk these days get everything and appreciate none of it”.

She has spent her entire life in Antrim, living in Castle Street and then moving to her current home in 1986. Living in such close proximity to St Comgall’s, “In the shadow of the church” as her father would often say, meant that her early life revolved heavily around religion.

There is an obvious lament over the lapse of religion as the gel that holds families together, and particularly its influence on the younger generation, as she goes on to say, “There’s less respect, they don’t pray enough. In my family anyway, I brought them all up well, or at least we thought so. We made sure they went to mass and we didn’t send them, we went with them”.

In her own words, her faith is, “the be all and end all”. She goes on to muse that, “Nowadays sometimes people would ask you how you were and you’d say, ‘Aye, I’m alright today that’s what prayer does for you’ and they’d turn up their noses at you”.

Music and singing are also large parts of Mrs Shannon’s life. She explained that she had been part of the church choir from an early age and was often called upon to sing at events such as the laying of the foundations of St Comgall’s Primary School. Although the onset of age has meant that her singing days are mostly behind her, she still harbours a strong passion for music and song.

Her face lights up when asked about any memories that stick out as being particularly cherished. “Probably my wedding day,” she says, “that or the day my children were born”. Her husband, like her, was also heavily involved with the community. “He was always about doing something when he wasn’t working on the railway, which was a good job back in those days” she says before going on to speak of her children. Having had nine children in total but unfortunately losing one before its birth, her family is of great importance to her and there’s no mistaking the pride in her voice as she described their upbringing.

Despite having lived through some of the worst periods in Northern Irish history, particularly the years of the Troubles, Mrs Shannon has said that the worst of the atrocities largely passed over the Antrim community, “We were never affected by that much here. Everyone here is in a close-knit community and keeps themselves to themselves, religion was never an issue for us”.  And despite the constant march of time, Mrs Shannon has proven herself to be smart, funny and warm whilst showing absolutely no signs of slowing down.

The Making a Difference course is making a splash with the local residents of Antrim parish. 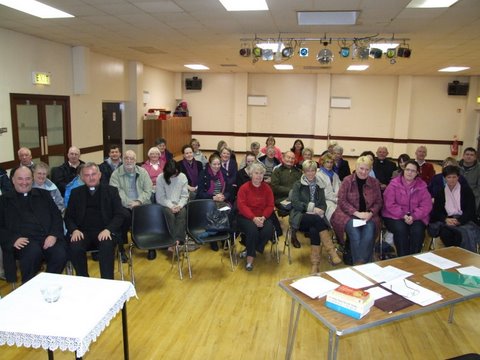 Held on a monthly basis in St Comgall’s parish hall, the course is focused primarily on strengthening the faith of the community and encouraging residents to work together towards a better future together.

Antrim resident and group member Catherine McGuigan commented on the course saying, “It’s about bringing the community together, developing faith and listening to other people’s opinions and views”.

““I think it’s to get people more aware of what the parish people can do for themselves,” says fellow member Billy Darby. He adds, “It’s about listening to people from different areas of the church. It’s very good and it’s challenging”.

The course features guest speakers from all walks of community life, both lay and clergy and gives community members the chance to discuss and air their own views and perspectives on parish activity.

Seamus Kearney, another member of the group said, ““I’ve been along to a few of the meetings. It’s about having a look at the parish and how to get involved. You can listen to the speakers and then have your own say”.

The course offers an opportunity for anyone to get involved and to share ideas, pitch in and get involved personally with the direction of the community. Catherine McGuigan added, “It started off about developing our faith and getting interested in pastoral care, but I think it’s become much more than that”.

For anyone interested or for more information, the Making a Difference course is advertised in the Parish bulletin and details will be read out at Sunday Mass .