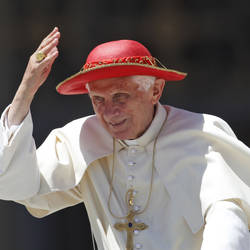 An international production on the life and works of the Pope has been announced in Munich. The film is due out in 2014 and will be based on the written biography by Peter Seewald

In 2011 Weckert produced a documentary entitled “Francis and the Pope”, about a young choirboy who was chosen to perform a solo piece before the Holy Father. The team followed Benedict XVI on his trips to Africa and Israel to gather material for the production. The film on Benedict XVI will be based on Ratzinger’s biography which will be published by Peter Seewald in spring 2014.

Seewald – who is the author of “Light of the World”, a book-length interview with Benedict XVI, published in 2010 – will advise on the film script and screenplay.