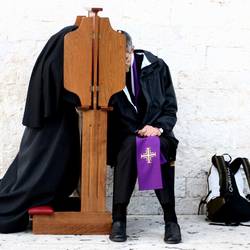 “During the course of the Permanent Council, a number of my colleagues admitted that after the Pope’s words on the sacrament of confession, numerous faithful have been coming to church to confess. It has been reborn as a wish, it was an engaging and emotional moment” linked to Pope Francis’ election. The Secretary General of the Italian Bishops’ Conference (CEI), Mgr. Mariano Crociata said this during the press conference held after the CEI Permanent Council meeting. The meeting was not as big this time as it coincided with Benedict XVI’s resignation and the Conclave.

Crociata also explained that the president, Cardinal Angelo Bagnasco, did not give the traditional opening speech to introduce the council, to show sensitivity towards the new Pope. The recent “extraordinary events” made it impossible for between the Pope and the head of bishops to hold their usual meeting on the issues mentioned in the introduction, beforehand.

Crociata also said Pope Francis was invited to take part in the general assembly of bishops that will be held between 20-24 My in Rome. “The Pope has been invited; we are just waiting for him to let us know about his availability,” the prelate said. Finally, Mgr. Crociata observed how Bergoglio’s election to the Throne of Peter is a sign that the “Church is alive” and marks “a new beginning, a new path we will be taking alongside him.”