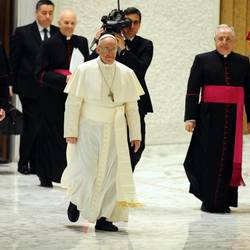 Curia: Reforms on the horizon

For now everyone remains in their place, but the heads and deputy heads of the Dicasteries may change soon

So everyone’s positions have been confirmed, but none have really been confirmed. The heads of the dicasteries, the cardinals of the congregations and the archbishops who are Presidents of Pontifical Councilskeep their places, but only for the time being, “until otherwise decided.” Strangely, the statement also mentions the secretaries (departments’ number-twos) who keep their jobs when the Holy See becomes vacant and therefore do not need to have their posts reconfirmed. Their mention could signify that, although everyone is expected to continue performing their usual duties, no one can assume they will keep the same posts they currently occupy.

The Vatican statement does not mention the Vatican Secretary of State Tarcisio Bertone explicitly, who was greeted publicly by the Pope two days ago in the Clementine Hall. It only mentions his role as chamberlain.  But the Secretariat of State is the first of the Vatican dicasteries and therefore the temporary confirmation also applies to the 78-year-old cardinal from Italy’s Canavese area, head of Vatican diplomacy and director of the Curia machine since 2006. It is thought the replacement of the Secretary of State, who is almost 79, will be the quickest, while other substitutions may made in the coming months.

Yesterday, Brazilian cardinal, Claudio Hummes, a friend of the Pope who sat next to him during the Conclave and appeared at his side on the balcony of the Central Loggia in St. Peter’s, spoke about the reform of the Curia. The cardinal, interviewed by Italian newspaper Avvenire, said: “The topic of the Roman Curia has been much discussed by us cardinals during the General Congregations. Many are waiting for a reform of the Roman Curia and I’m pretty certain that Francis will do it, and will do in the light of the Word, of essentiality, of simplicity and of the humility required by the Gospel. In the wake of the Saint from whom he took the name.” The Poverello of Assisi, said Hummes, “had a great love for the hierarchical Church, for the Pope; he wanted his friars to be Catholics and to obey the ‘Lord Pope’, as he put it.”

Meanwhile, pending potential future reforms, “self-reform” has started in the Roman Curia and in whoever gravitates around the Vatican. The Pope may not wish to use the flagship vehicle of a fleet of luxury sedans but several of those who were accustomed to using them are beginning to wonder how they can continue to do so. Some men with links to the Vatican financial institutions have been left hanging: “The new Pope is not Italian, he is not European, and he is unfamiliar with the way things work here… Italy could become a country like any other.” There is one particular concern meandering in the Tower built by Nicholas V, the headquarters of the IOR, the Institute for Works of Religion. Hundreds of thousands of euros were spent on just one market research study and the finger is pointed at the president of the “Vatican Bank”. People who are used to using the large official vehicles of the Vatican fleet to ferry them back and forth are beginning to think that it might be much better to take a taxi. Better not to risk it. The Pope, who is used to taking the minibus with his “Cardinal brethren”, standing in line for breakfast at the self-service restaurant in the Domus Sanctae Marthae and settling his hotel bill in person, could look out of the window and see that he is surrounded by people who are not getting the drift and not following suit.

“Self-reform” might not relate only to the Holy See, the Vatican, and the style of the Curia. It could also extend to the dioceses.