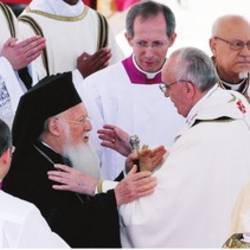 Bergoglio and Bartholomew I

It was the first time since 1054, that the Patriarch of Constantinople attended a Pope’s inauguration

“Bergoglio was an ordinary for followers of the Orthodox rite in Argentina” and even when he was still in his own country he had excellent relations with his “separated brethren”, explains Cardinal Achille Silvestrini, a former foreign minister and Prefect of the Congregation for Eastern Churches. Therefore “he is familiar with this tradition and respects it,” a tradition that also includes married priests. Yesterday, as well as keeping kneeling stools, the new pope handed out hosts dipped in wine at Communion, as is usual in Eastern rites.

This sends out an important message: promising continuity with Ratzinger’s liturgical reforms while paying attention to the values of the Eastern churches which could enrich Western Catholicism, in danger of stagnation, as the council of the Italian Episcopal Conference (CEI) also warns. For the first time since 1054, the spiritual leader of the Orthodox Church and Patriarch of Constantinople attended the inauguration of the Pope (also Bishop of Rome) in St. Peter’s Square. Ecumenical diplomacy sprang into action as soon as the Argentine cardinal was elected. Bartholomew I is based in Istanbul (what was Constantinople in ancient times).

He is considered to be the “first among equals” of the 14 Eastern patriarchs and a guiding light for the entire Orthodox community. He has highlighted the importance of bringing all churches closer together with the aim of reuniting them, churches that represent 1.5 billion believers the world over. Bartholomew told the new pontiff: “[We wish for] the continuation of our journey towards reconciliation and consolidation of the dialogue for the unity of our Sister Churches.” Then he commented: “This Pope is a good shepherd. He has shown a real closeness to the people right from the start. I was really impressed. We’re meeting in private tomorrow and I intend to invite him to Istanbul.”

There are also encouraging signals coming from Russia. Metropolitan Hilarion, the chairman of the Moscow Patriarchate’s department for external relations, recognises that when Bergoglio was the Archbishop of Buenos Aires, he established “good relations built on trust with the Orthodox community.” Francis is counting on the good offices of Bishop John, the head of the Orthodox Church outside Russia and based in Buenos Aires.

Every year Bergoglio has attended Christmas mass in the Orthodox church of the Argentine capital. He also has members of the Greek Catholic clergy “in his sights”, whose leader in Ukraine (Major Archbishop Sviatoslav Shevchuk) became a friend of Francis’ during his two years of service in Buenos Aires (2009-2011). Right from the time of his studies in the seminary, Bergoglio had built ecumenical relationships through his teacher, the Salesian Ukrainian priest Fr. Stepan Czmil, sent by the Vatican ministry for Eastern churches to work among his countrymen in Argentina. In September 2008 the Synod of the Ukrainian Greek Catholic Church began his beatification process.

In short, Bergoglio could not have had a better “ferryman” steering him towards the Orthodox world and his election revives the dialogue concerning a “communion” between Christians as invoked by the Second Vatican Council. Few in the Catholic Church’s hierarchy know the traditions, culture and liturgy of their “separated brethren” as well as Bergoglio. The Community of Sant’Egidio is also working behind the scenes and – through Conclave members Sepe and Dziwisz and the Vatican’s minister for the family, Vincenzo Paglia – has actively supported Bergoglio and is now providing him with expertise, experience and international relations.

Another collaborator of Francis’ is the Catholic Archbishop of the Mother of God in Moscow, Paolo Pezzi. Moscow’s Patriarchate is at the centre of a series of scandals surrounding the luxurious, privileged lifestyles of its clergy. Pope Francis has sparked a desire for the reform of their own church among Orthodox believers.