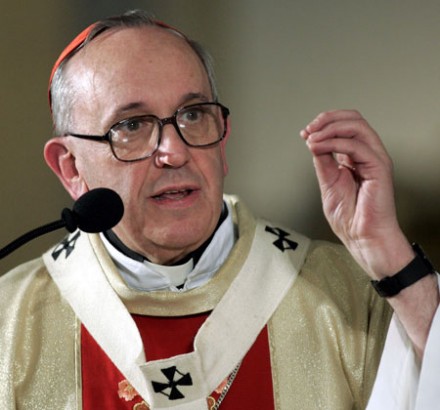 Cardinal Jorge Mario Bergoglio (Photo: CNS)
to replace Benedict XVI when his time comes: the first Jesuit, and the first Latin American, in Church history to occupy the See of St Peter.For Bergoglio’s enemies, the revelation will come as no surprise. It only proves, they will say, what we thought all along: that behind all that humility what Bergoglio really cares about is ambition.But for almost everyone else it does seem remarkable that a relatively obscure South American cardinal should have been an obstacle in the path of the great German theologian and former prefect of the Congregation for the Doctrine of the Faith. The “secret diary” suggests that Cardinal Carlo Maria Martini, the former Archbishop of Milan and the standard-bearer for the progressive cardinals, asked not to be taken into consideration for reasons of age and health. His votes (around 40, according to the diary) went instead to Bergoglio, who was seen as the best hope for those who wanted, for whatever reason, to stop Ratzinger. Although the Bergoglio vote was not enough to stop Ratzinger, it prevented the German sweeping the board in the first two rounds.

Bergoglio as Pope? Perhaps it is not so surprising. There was much talk, in John Paul II’s final years, that his successor should be a Latin American; the feeling was widespread that the continent’s hour was near. Bergoglio would be a safe bet: at 69 he is relatively young, and comes with many virtues: he is austere, doctrinally solid, and with a proven track record in Church governance, as Jesuit provincial, then auxiliary bishop and Cardinal Archbishop of Buenos Aires.

Bergoglio’s star shone in Rome when he replaced Cardinal Edward Egan as relator for the September 2001 synod after the Archbishop of New York had to dash back to his traumatised city. The Argentinian moved easily and with great confidence into the role, leaving a favourable impression as a man open to communion and dialogue.

But there is little else in public view, the modest glimpses of Bergoglio only serving to heighten his enigmatic profile. The newspapers have rightly stressed that he is modest, dressing mostly as a simple priest; that he always travels on the bus or metro rather than by taxi or with a chauffeur; and that he regularly travels to the furthest ends of his three million-strong diocese, preferably to visit the poor.

And then, of course, there is that Trappist silence. His press secretary, a young priest, spends his time interpreting what the Cardinal does not say. The other part of his job is to turn down, on Bergoglio’s behalf, interviews or invitations to write articles. The Archbishop of Buenos Aires has almost no published work, and seems to become less visible with each passing year.

When he does speak, however – in the annual Te Deums preached from the cathedral – it is dramatic. Bergoglio thunders like an Old Testament prophet; the government quakes in its boots.

What is certain is that he is not loved by most of his Jesuit companions. They remember him as their provincial during the violence of the 1970s, when the army came to power amid a breakdown in the political system after the death of General Peron. Apart of the Church in Argentina was involved in the theology of liberation and opposed the military government. Bergoglio was not. “After a war,” he was heard to say, “you have to act firmly.”

He exercised his authority as provincial with an iron fist, calmly demanding strict obedience and clamping down on critical voices. Many Jesuits complained that he considered himself the sole interpreter of St Ignatius of Loyola, and to this day speak of him warily.

The secular clergy of his diocese, however, love their archbishop. As auxiliary bishop in Buenos Aires in the 1990s, he managed always to be with his priests, keeping them company through crises and difficulties and showing his great capacity for listening sympathetically (I have heard many stories of Bergoglio spending hours with elderly sick priests.) He also continued to show his option for the poor by encouraging priests to step out into the deep in intellectual and artistic areas: Bergoglio has never hidden a passion for literature.

Ironically, it is the same Bergoglio who, as Jesuit provincial, demanded absolute obedience and political neutrality, as the Archbishop of Buenos Aires wants his priests to be “out on the frontiers”, as he puts it.   Cardinal Bergoglio regularly travels to the furthest ends of his three million-strong diocese to visit the poor. He wants them in the neediest barrios, in the hospitals accompanying Aids sufferers, in the popular kitchens for children.

To take one example: when, last year, a number of young people died in a fire in a rock club tragedy, Bergoglio went to their aid in the middle of the night, arriving before the police and fire service, and long before the city authorities. Since the tragedy, one of his auxiliaries has a ministry to the family and friends of the victims, and has not been backward in criticising the government for its response to the tragedy.

Bergoglio is admired as being far from the powers of this world, indifferent to his media image, preoccupied by   the future of society, and a man looking always for new forms of social solidarity and justice in a country where 15 per cent are unemployed and thousands rummage through the bins at night looking for something to eat.

The media do not punish him for his silence, but speak of him with awe and respect. Many, including agnostic critics of the Church, regard him as the most credible social leader in a country in which, it ought to be said, politicians, union leaders and businessmen are regarded with considerable scepticism.

Where do his political sympathies lie? Certainly not on the Left. Those who know him best would consider him on the moderate Right, close to that strand of popular  Peronism which is hostile to liberal capitalism. In the economic crisis of 2001-2002, when Argentina defaulted on its debt, people came out on to the streets and supermarkets were looted, Bergoglio was quick to denounce the neo-liberal banking system which had left Argentina with an unpayable debt.

The same people who would say he was apolitical would be quick to add that he can move pieces along with the best chess-player. Soon after his appointment to lead his diocese he appointed six new auxiliary bishops, all people well-known to him and loyal. His style of government is discreet, but decisive.

A chemist by training, born to a working family of  Italian origin in a traditional middle-class quarter of Buenos Aires, he was for many years in charge of the formation of young Jesuits.

He is without doubt the strong man of the Argentinian Church, almost certain to be elected president of the bishops’conference at its next meeting.

With his suave manners and gentle voice, Bergoglio is not a theologian or an outstanding intellectual nor a polyglot (although he can cope with foreign languages), but he moves in all milieux securely and ably, especially in Rome.

Whenever I have met him, I have been struck by his astonishing paucity of words – even more remarkable in an Argentinian – and his hieratic gestures, but also by his intelligent gaze, his obvious spirituality, and his constant preoccupation with the poor.

If he were Pope? Everything suggests that his approach would be above all pastoral, which is what a number of the cardinals were looking for in the conclave. He would govern the Curia with a sure hand, as he does his diocese. He would likely take a firm stand with the powerful of this world. But the modern-day media demands on the papacy would be a torture for this most retiring of Church leaders.