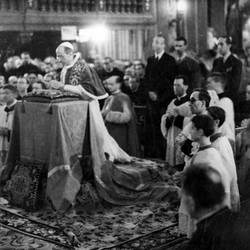 Vatican newspaper “L’Osservatore Romano” has published the findings of a study carried out by Patricia McGoldrick: Letters from the British National Archive reveal how Pope Pacelli fought Nazism partly through investments in the U.S.

At the centre of it all is the famous Bernardino Nogara, a member of the Commercial Bank of Italy, whom Pope Ratti – of whom he was a family friend – put in charge of Vatican finances. He was responsible for the Vatican’s financial strategy which contributed to the Allied victory against the Nazis under the leadership of the Roman Curia.

New British Secret Service documents held in the British National Archive which date back to the period between 1941 and 1943 describe the activities of the Vatican’s main financial institutions: the extraordinary section of the Administration of the Property of the Holy See (ASSS) and the Institute for Works of Religion (IOR). “The letters reveal that aside from all the regular communication between dioceses, nunciatures and Catholic institutions spread across the world, considerable cash transferrals were also made to big U.S. business banks,” L’Osservatore Romano reports.

The documents show that at the beginning of World War II, the Vatican lost no time in transferring its bonds and gold reserves from areas that were faced with the threat of Nazi occupation to the United States. The U.S. became the financial base from where the universal Church was sustained and administered, with another ten million dollars being invested in the American economy.

From the very first years of his mandate, Nogara was able to create a network of relations and contacts, opening accounts with JP Morgan & Co., while the IOR used the services of the National City Bank of New York. Meanwhile, in Britain, the ASSS had an account with Morgan Grenfell, the sister bank of JP Morgan and the IOR had links with Barclays. These activities, McGoldrick writes, are clear proof that the Vatican systematically sent its bonds via Lisbon, even those which were registered in countries that had been blocked by the Nazis, moving them to safe havens in the U.S. Then, once authorisation had been given by the Department of the Treasury, these could be freely placed on the American markets.

At the start of the war, the Holy See decided to move enormous sums of money (bonds, gold reserves, revenue from dioceses, donations etc.) from territories that were occupied by the Nazis to the United States – with Washington’s approval.

But what triggered these cash movements? British records provide information on two crucial aspects, L’Osservatore Romano reports: one is that the Vatican’s American accounts mainly contained money from dioceses, contributions from faithful and religious institutions across the world and the second is that it also contained revenue from bonds and investments, though in lesser amounts accounting for around 20% of the total. A large portion of this money went to Churches in difficulty and to missions, nunciatures, seminaries and dioceses across all continents.

Europe had another privileged channel for transferring money, the researcher writes. In order to offer some relief to Churches that were persecuted during the Nazi occupation, wherever Catholic schools, monasteries and churches had been confiscated or closed down, youth organisations and Catholic publications suspended and numerous priests and clerics arrested and put in concentration camps, the IOR kept a separate account open in the Chase National Bank in New York.

When the British government tried to close down one of the accounts, the Vatican appealed directly to the U.S. government and was successful. The documents from the National Archives also reveal that money was sent to fund humanitarian activities to help allied troops and populations devastated by the war. In 1944, for example, Pius XII organised flour shipments to Rome, where he had already ensured a hundred thousand hot meals were being served each day, as well as importing various foodstuffs from Argentina and Spain to Italy and Greece.

But this is not all. As Nogara’s Washington contacts confirm, as of 1939, the Vatican invested enormous sums of money in US Treasury Bills, in important manufacturing and technological companies, in companies such as Rolls Royce, the United Steel Corporation, Dow Chemical, Westinghouse Electric, Union Carbide and General Electric. Patricia McGoldrick even speaks of a flow of money from the Vatican, being used to fund the U.S. war industry which helped in defeating the Nazis.