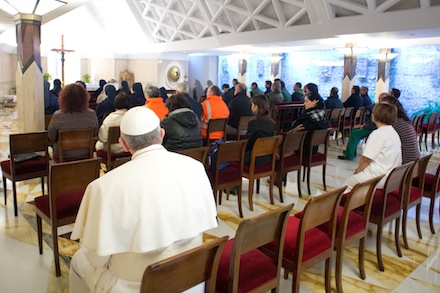 Pope Francis in the chapel of the Domus Sanctae Marthae (CNS)

The Pope asked if Catholics have opened themselves to “that continuity of the church’s growth” that the council signified. The answer, he said, is “no.”

Catholics seemed willing to celebrate the 50th anniversary of the council’s opening in 1962, he continued, but said they want to do so by “building a monument” rather than by changing anything.

Pope Francis ended his homily by encouraging everyone to pray for docility to the Holy Spirit, “to that Spirit who comes to us and urges us forward on the path to holiness.”