As attendance at Mass and the confessional ‘soars’, his pastoral strategy is looking clearer;

who knows? The ‘Francis effect’ may even prove durable 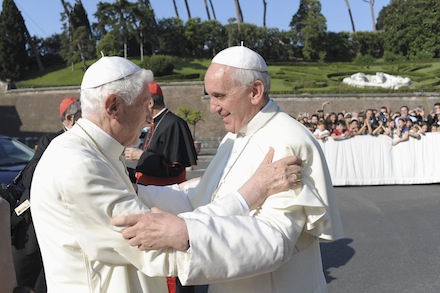 With that declaration, with his open support for this book, and with the decision to make the text of his letter public, Pope Francis is making an explicit declaration of his own ecclesial position, which he clearly expects to be noted by all: viz that he supports Benedict XVI’s vision of the Church, and absolutely rejects the so-called “Spirit of Vatican II”. There can now be no question of writing off this Holy Father as a “liberal Pope”: not unless you are one of the weird eccentrics who attempts to do the same for Benedict XVI himself.

The book Pope Francis is so enthusiastically endorsing is described by its publisher, the University of Chicago Press, as an “important study” which “makes a significant contribution to the debate that surrounds the interpretation of the Second Vatican Ecumenical Council. Archbishop Marchetto critiques the Bologna School, which, he suggests, presents the Council as a kind of ‘Copernican revolution’, a transformation to ‘another Catholicism’. Instead Marchetto invites readers to reconsider the Council directly, through its official documents, commentaries, and histories… [Cardinal Koch writes] that [this] interpretation of the Council” has “taken up and deepened the hermeneutic of reform supported by Benedict XVI.”

There’s a good bit to be said about this “Bologna School”, and it can get fairly complicated. Let’s just say that that’s who Benedict XVI was attacking in his famous address of December 2005: The Bologna School it was which invented and propagated the “hermeneutic of rupture”, in the name of “The Spirit of Vatican II”, which it held should supersede the actual texts of the Council. Archbishop Marchetto is its bête noire.

It’s worthwhile at this point to recall (remembering the Bologna School and its teachings) the text of Benedict’s address. “The question arises”, says Pope Benedict: “Why has the reception of the Council been so difficult for such a great portion of the Church up until now? Well, all depends on the correct interpretation of the Council or – as we would say today – on its correct hermeneutic, on the right key to interpretation and application.

“The problems of reception”, he goes on, “have arisen from a struggle between two conflicting forms of interpretation. One of these has caused confusion; the other, in a silent but increasingly visible way, has brought results, and continues to bring them. On one hand, there is an interpretation that I would like to call ‘hermeneutics of discontinuity and rupture’ (That’s the Bologna School he’s talking about):

It would be difficult to be more enthusiastic than Pope Francis in his endorsement of Archbishop Marchetto’s scholarly development of Benedict XVI’s teachings, and his rejection of the hermeneutic of discontinuity and the notion that it is “necessary to follow not the Council texts, but its spirit”. “I am grateful to you”, he concludes, “for all the good that you do for us with your testimony of love for the Church, and I ask the Lord that you be abundantly blessed. I beg you please not to forget to pray for me. May Jesus bless you, and may the Virgin protect you.” The implications of this fervent endorsement, says Father Z , are “HUGE, with a capital H and capital UGE.”

This declaration will not be noticed by the secular media: and who cares? But it will be noticed by Hans Küng and his crew, and by the Tabletistas. The media will still respond positively to Pope Francis’s pastoral instincts and so should we all. We should also note the enthusiasm of many semi-lapsed Catholics: according to the Daily Mail, “After years of decline, cathedrals in Britain have seen a 20 per cent rise in congregations since the Argentinian Pope was elected as head of the Catholic Church eight months ago. And the ‘Pope Francis Effect’ is being felt across the world, with new and lapsed Catholics surging back to the confession box ‘by the hundreds or thousands’, according to the Italian Centre for Studies of New Religions. In Italy half of priests have noted a marked rise in support for the Church”. And so on. Even the sourest Francis-sceptic can hardly claim that all that is actually a bad thing: the worst they can say is that maybe it won’t last. But maybe some of it will. That growth in recourse to the confessional is particularly interesting: that looks serious, and potentially durable.

I ended my last post by saying that I was confident that “as the pontificate unfolds, [anxieties about Pope Francis] will become progressively calmer and then fade away. I think the Holy Father will pull it off.” My confidence in that outcome has just been given a major boost, by the Pope’s unambiguous endorsement of Archbishop Marchetto. This pontificate has just passed an important milestone.