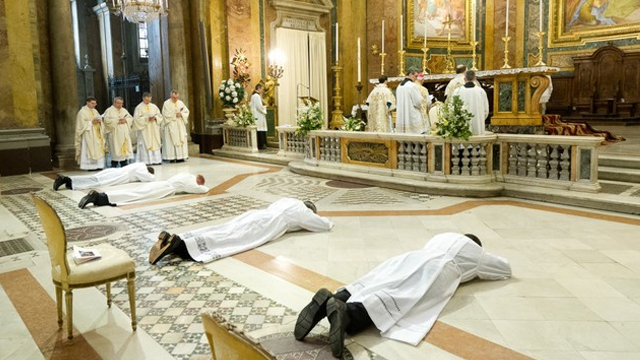 Four Irish seminarians have been ordained deacons at the Pontifical Irish College in Rome.

The seminarians were ordained deacons in the fourth century Basilica of Saints John and Paul by Archbishop Dermot Clifford, Archbishop of Cashel and Emly. During the ceremony, Archbishop Clifford recalled his own diaconate fifty years ago during the time of the Second Vatican Council.

All four deacons are currently studying theology at the Jesuit-run Pontifical Gregorian University in Rome following previous seminary studies for three of them at Saint Patrick’s College Maynooth and for the other at Saint Malachy’s College, Belfast. Ordination to the diaconate is most often received one year prior to ordination to the priesthood.

The ordination ceremony was attended by over one hundred family members and friends from Ireland. It was held at the Irish College in Rome which dates from 1628 and has been educating generations of priests for service in Ireland’s twenty six dioceses since then.

In *2011, the 26 dioceses of Ireland had 91 students for the priesthood assigned to them. Statistics on ordination and those entering religious life state that there were six diocesan ordinations in 2011 that is compared with nine in 2006 and 29 in 2001. In 1984 when the first such statistics were available there were 76 ordinations.

Looking at other ordinations the figures reveal that clerical religious orders ordained five and professed seven men in 2011, compared with five ordinations and two professions in 2006 and 10 and six in 2001.

Deacons represent Christ the servant sacramentally. A deacon is called to embody the work of Christ in charity, in the word and at the altar. There are as many ways of serving: deacons can baptise, witness marriages, bring viaticum to the dying, visit the sick and housebound, assist in sacramental preparation, promote knowledge of the social teaching of the Church, and preside at funerals. Deacons proclaim the Gospel and may serve as the homilist at Mass.