Archbishop’s parents are from Cavan and Sligo. 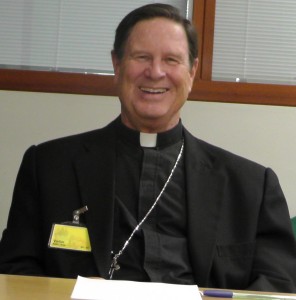 Bishop Walsh said that while he is not involved with the legal side of the women’s case he believes such a claim may form part of their defence.

He explained that he has been in Peru with seven years, and because he is Irish (with parents are from Cavan and Sligo) he wanted to visit the women.

He related how he prayed with them and left them a copy of the New Testament. He then contacted their families at their request, as telephone contact between prisoners and their families is very limited.

“I think the fact that I, as an English speaker, was able to go to the prison and visit the girls and pray with them, I think gave comfort to their families. They are both from good religious Catholic families,” he said.

He spoke with Michella’s mother Norah who he said has a strong faith. “Thank God for that,” he said. “If we walk by faith we know there is going to be the best solution.”

He hopes to visit the women again soon and bring a complete bible to them.

He set up his church in Peru in 2005 and fully expected to be ministering to South Americans.

Soon he noticed Europeans who were poorly dressed and going through the rubbish for food and realised these were former prisoners many of whom had been drugs ‘mules’ to feed their habit.

He now regularly visits such men in prisons where he holds weekly bible classes.  He also communicates with prisoners’ families for them by Skype or email and he receives money from their families to pass on to them.

“I try to be a liaison with the families because really their recovery is helped by the family’s involvement,” he said.

He explained that even people who were “downright guilty” and did things because they were strung out on drugs, did not stop being people.

“They are human beings and the Lord wants to turn their lives around and that’s what the whole story of the bible is – God’s relationship with us and his alliance and how we mess that up and he is the God of second chances.”

He said that the Irish community in Lima and himself will visit the women and pray with them and pray for them in the coming days and weeks.

He will continue his work bringing food, medicine, money, clothes and correspondence to the prisoners in Peru.

“This whole drug trade is such a tragedy from start to finish,” he said.

The Irish Council for Prisoners Overseas (ICPO), established in 1985 by the Irish Catholic Bishops’ Conference, has issued a statement on the assistance it offers to prisoners overseas stating it works for all Irish prisoners wherever they are regardless of religious faith, the nature of the prison conviction, or of a prisoner’s status.

The ICPO reports that in South and Central America there are a higher proportion of drugs-related offences.

In the last four years the number of prisoners assisted in this region has not gone above 10 each year whereas it has been more than 500 and not more than 1,000 in the UK.