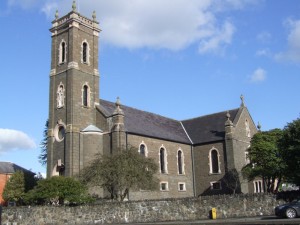 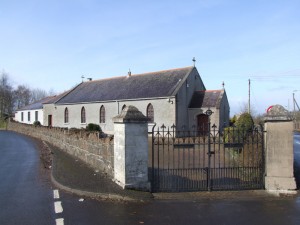 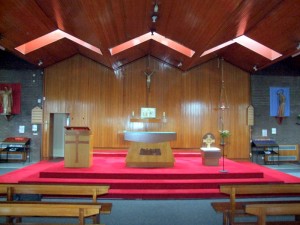 ‘The Parish’ system of Church administration has been in existence since the 13th century. Drummaul Church (Antrim was under the direction of Drummaul at the time) appears in the records of the Taxation Role of Pope Nicholas IV in 1306, as recorded by Monsignor James O’Laverty in his ‘History of Down and Connor’.

Long before the Plantation era which began in 1606 several churches existed in the area, but even the ruins of these have long since disappeared. Three miles south of Shilvodan (Tannaghmore) towards the townland of Kilbegs (Little Church) there once stood a little church built by Saint Sillan after whom the nearby Mound of Dun Silly is probably named. Sillan later became Abbot of Bangor and his successor, who died in AD612 was known as ‘Fintan of Antrim’

By the beginning of the 17th Century the churches of Drummaul, were in ruins. After the Plantation, church lands passed to the king, as head of the reformed church and the penal laws were at their fiercest. The penalty for allowing Mass to be celebrated in ones house was £30 (by today’s value £600) and imprisonment for a year. Prior to the opening of the church in Randalstown, built by Father Peter O’Boyle in 1784, Catholics in the parish heard Mass in the open air at various places referred to as ‘Stations’. In some parishes there were Mass Rocks (Carraig an Aifrinn), the four in this area were:  Tornarush (near Drumsough, Randalstown) Kilbegs (Milltown) Magillstown Race Course (between Antrim and Shanes Castle) and Shilvodan (Tannaghmore). Mass for the Shilvodan congregation would have been said on Drumkerran Hill, a little above the site of the ancient church of that Grange, dedicated to Saint Boden and administered by the Prior of Muckamore before the Parish System of Church Administration which was set up in the 13th Century.

In 1817 Father Bernard McCann began to raise funds to build a church in Antrim. The foundation stone was laid on 19th November, 1818. Following the completion of  building and the consecration of the church by Bishop McMullan on 19th June 1920 Father McAuley was appointed parish priest. The cost to erect it was £1,400 which was raised by subscription. It accommodated 600 people of which, only 60 were seat holders (these were situated around 3 sides of the church on a raised gallery). The remainder of the congregation stood on the earthen floor during Mass.

Fifty-two years later in 1870 under his personal supervision, Father Henry O’Loughlin erected our present church on the same site, building it around the old church up to roof level before removing the old stonework of the previous church. It is worth noting that into the angle on the western side of the new church is worked what is undoubtedly a portion of the walls of the earlier 1818 edifice and in the southern transport gable niche there is the beautiful statue of the Blessed Virgin Mary; this statue stood above the main entrance on the original church. The Church was dedicated to Saint Comgall (founder of the Abbey in Bangor). In the year 822 when the Danes plundered Bangor Abbey, the relics of the saint were transferred from Bangor to Antrim.

The Annals of the Four Masters preserve the question in which the Saint foretold this:

“It will be True True”

“By permission of Supreme King of Kings, My Bones Shall Be Removed Without Defect from Beloved Beannchair to Aentrebh”.

In 1873, three years after the erection St Comgall’s Chapel, Antrim separated from Drummaul to become the Parish of Antrim.

In March 1828 Thomas Madden transferred the site for a new church in Tannaghmore to Father Cureo who erected the new church to Saint Mac Nissius in 1831. As a result of a legacy left to Father Vincent Davey for the church in the will of Mr Kerr improvements were made to the church and the opening ceremony took place in 1939. Father Murphy CSSR preached the sermon at the service in the presence of Most Rev Dr Mageean. The altar was a gift donated by Mrs Magee of Belfast, statues were presented by Mrs Blakinson Houston of Antrim and Mr James Davey of Belfast. Mrs McPeake of Templepatrick presented the Stations of the Cross.

St Joseph’s was built in 1972 to accommodate the swell of people to Antrim for work in the textile factory ( British Enkalon). Father George O’Hanlon was appointed parish priest and it became a thriving  separate parish however due to the fall in the number of parishioners and a shortage of priests in the diocese  it reverted  to the Parish of Antrim in 2009.

The number of parishioners in Antrim Parish is currently in the region of 6,600.